Along the year the key targets of the ST Foundation were the following:

1) boost the efficacy of the program while reducing the costs looking whenever possible for partners keen to bear part of the expenses of the activities;

2) strengthen the attention for impact’s evaluation of our activities in all areas of intervention to be always in line with the needs of the key stakeholders of the organization.

The Digital Unify Program offered free computer access and training to 620,840 beneficiaries since its inception and as of December 2018.

On December 5 2018, the ST Foundation Board acknowledged the resignation of Mr. Georges Penalver due to personal motivations. Further, the Board elected Philippe Brun as a new Member. The Board members and the ST Foundation’s staff have sincerely welcomed Mr. Brun onboard.

Image 1. Organizational Chart of the ST Foundation as of December 31, 2018

2018 represents a positive year for the ST Foundation. The implementation of the model lab concept in the areas  of intervention helped the organization reaching two important objectives: 620,840 trainees were reached since the inception of the program, and 115,650 students took part in the ICB and Tablet for Kids classes only in 2018.

In 2018, the trainee breakdown by country is shown below: 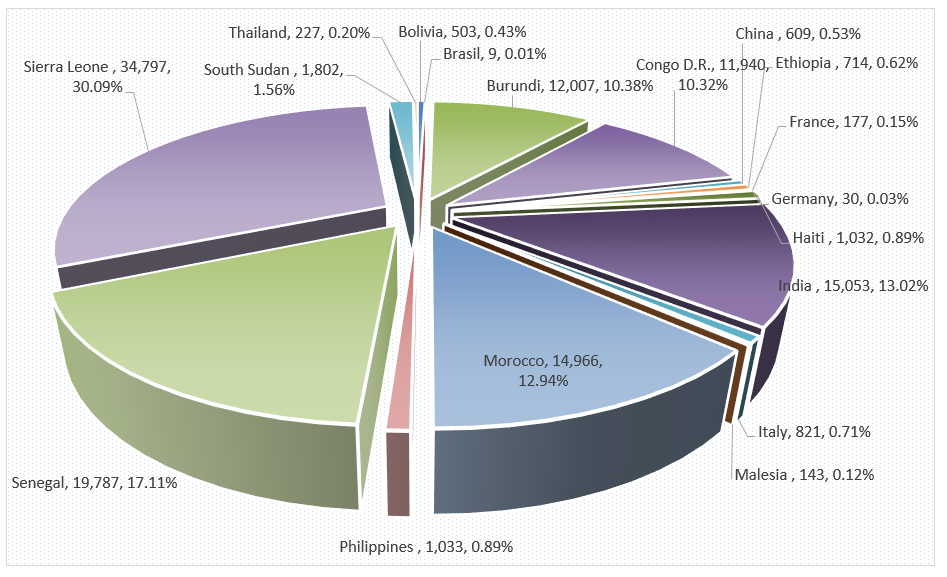 In 2017 the Board Members of the Foundation approved a new expansion strategy focused on the following principle: the action of the Foundation is implemented in those countries that have been identified as a priority by the Board of Directors. Everything else being equal, the preference goes to the countries where ST operates. The effective extension of the activities of the Foundation depends upon the identification of a local partner, which is actively searched. The interventions are not concentrated necessarily in developing countries, but wherever informatics illiterate people are present and need help. These guidelines were strictly followed in 2018 and the DU program was implemented in Africa with a particular attention to the efficiency of the DU Labs In parallel the Foundation reinforced its presence in ST countries, emphasizing the launch of new initiatives.

The collaboration between the ST Foundation and the ST Corporate External Communication team went on well in 2018. With their support the 2017 Annual Report was prepared and distributed to ST Foundation key stakeholders. The target of document is to give to relevant stakeholders ad hoc insights of the key moments that characterized the activities along the year.

It continued also the organization, with the ST volunteers’ precious support, of the third edition of the Energy Run, that took place on September 8 in Aldo Moro Park, near the ST site of Agrate (Italy). This obstacle race has the multiple targets of improving the visibility of the Foundation’s activities in Italy and abroad while collecting extra funds. The results of the event outperformed those of last year with: over 800 participants, a good part ST Agrate employees with 50 kids having fun and experimenting the run; over 8.000 euros collected with the event.

On January 18 with the support of the Italian ST volunteers the Foundation has delivered all the equipment for the set-up of a DU lab at Cara di Mineo informatics center. The project is extremely important for the high social value that it has, the center is in fact placed in the biggest European reception center for asylum seekers, refugees and immigrants. With this project ST Foundation Italian volunteers have once again confirmed their attention on projects that can produce high impact like the one mentioned above together with different interventions in prisons and other immigrants’ associations of the country. 96 migrants have successfully attended the ST Foundation’s courses along the year.

In March 2018 the Section 8 Company, ST Foundation India, was officially registered and have then become fully operational.  Mr. Pietro Fox and Mr, Renato Sirtori have been appointed as directors while the liaison office through which the Foundation has operated since 2003 was closed at the end of the year.  Thanks to this new entity the DU program will be able to be further expanded in the country reaching always new beneficiaries and further impact. Among the first activities of the new organization we had the testing (in September-October) and cascading of informatics advanced courses. This new educational offer includes detailed courses of Word, Excel, Power Point and Outlook for a total of 60 hours course.

In Q4 2018 the ST Foundation launched the DU4K project at the Jose Rizal Memorial School of Calamba. The primary school is located near the premises of the ST site and the activities are carried out under the supervision of the ST volunteers. Thanks to the good job of all the involved stakeholders the course is going on extremely well and it’s now been embedded in the school curriculum. In less than three months over 600 students were trained only in this school, largely outperforming any another example of DU4Kids course in other countries.

As every year, the ST Foundation implemented in Morocco different ICB classes during summer camps organized with carefully selected partners which work with kids and youth who come from disadvantaged conditions. Last summer the results largely outperformed all previous experiences with: 14 Labs, 11 cities, 33 trainers and 3899 beneficiaries. The Foundation is proud of these outcomes and as formal recognition for the activities implemented we received the formal visit of the Governor of Casablanca.

During the quality week, started on November 26th at the ST site of Bouskoura, the ST Foundation was invited to participate in order to raise the awareness on the activities carried out locally and internationally, while looking for possible new ST volunteers keen to create a Local Community.  The results of the initiative were extremely positive and, on one side, we found out that many ST employees would like to attend our courses to better understand how to use a computer while many others would like to actively become volunteers giving their personal contribution for the improvement of the Program in Morocco. 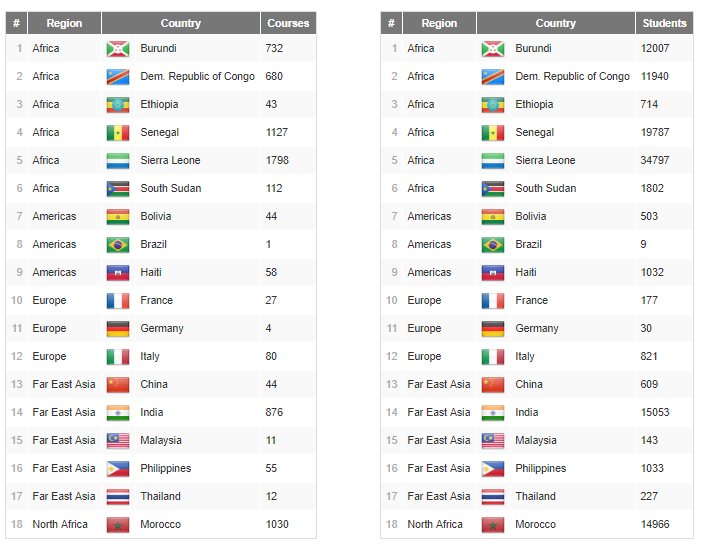 With the same tool, at the moment we can also monitor interesting details on the profile of the beneficiaries attending the courses.

Charts 1-2-3: Example of statistics showing the age of the participants together with the occupation and level of education 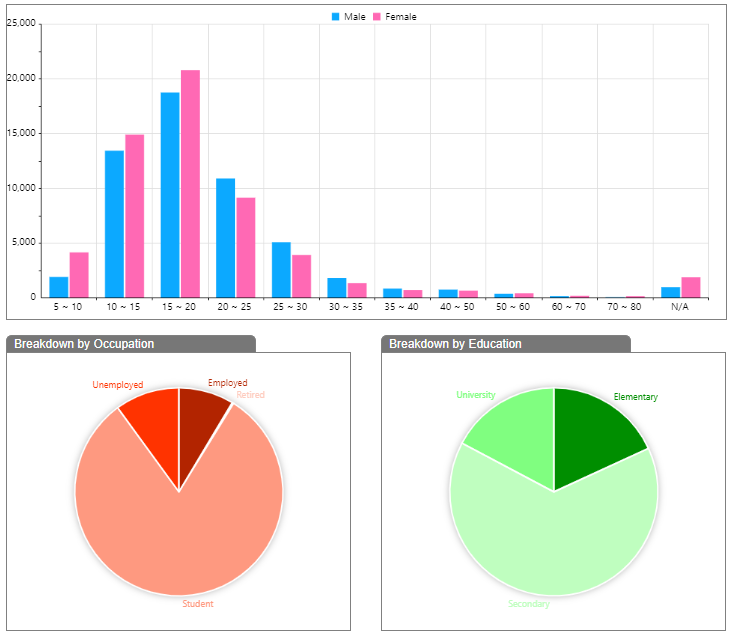 At the end of the ICB course all the students are asked to take a test and to reply to a feedback report which is used to monitor the progresses done by the participants after their attendance.

The results are remarkable:

World Wide overview on the impact of the ICB Course

In March Giovanna Bottani went to Senegal for a 10 days’ mission to start the pilot test of the Tablet for Kids course. In this occasion 16 students started discovering for the first time how to use this precious tool. The course was organized in Thies, a city near Dakar, where Giovanna trained, for a full week, a first group of trainers while teaching to the kids (a group of children between 9 and 13 years old coming from nearby schools). The feedback received was extremely positive. Children, trainers and partners were enthusiastic on its content. After the end of the test the manual was revised according to the collected feedbacks and then the course has been officially launched in the country.

On June 1st Enrico Riva organized a 15-day mission to Sierra Leone with two key purposes: visiting the Foundation’s DU labs and auditing them to verify that the activities are carried out in the best way while solving technical problems wherever present; organizing official meeting that could help our program to grow in the future years diminishing the running costs. Among the most relevant ones on June 4th and 13th Enrico met Dr. Hamid El-Bashir Ibrahim, UNICEF country representative, evaluating possible synergies and collaborations. On June 14th Enrico met Peter Bayuku Konteh, Minister of Trade and Industry, also in this case different ways of future partnerships have been envisaged.

In July Mauro Decca visited Congo and Burundi to meet on a regular basis the representatives of the local partners the Foundation has in the countries and through which it operates. The activities of all the existing centers have been carefully reviewed and improvement actions were put in place to enhance the results.

In September Giovanna Bottani visited Sierra Leone for a 10 days’ mission with multiple purposes. First of all, there was the official kick off of the Tablet 4 Kids in the country. After the first week of the train the trainers’ course held by Giovanna, the 3 selected trainers ended the second week of the course. All the students attending the lessons passed the final test and received their certificates. Considering the course results and the feedbacks given by the trainers and kids, Giovanna with the support of the local coordinator adapted the training material and finalized the document to further cascade the program in the country. In parallel key partners have been met to evaluate possible new synergies during 2019 and more in detail: UNICEF, and the Minister of Trade.

In September Pietro Fox went to Paris for an event dedicated to celebrate the good results of the multi-stakeholder’s project “Numerique pour tous”. He represented the Foundation in this occasion and discussed with Jean-Luc Estienne, site manager of the ST site of Paris the possibility of introducing new informatics courses for the elderly. 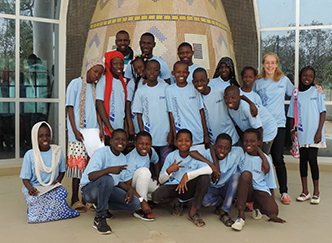 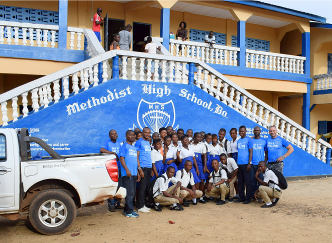 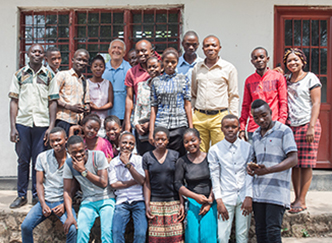 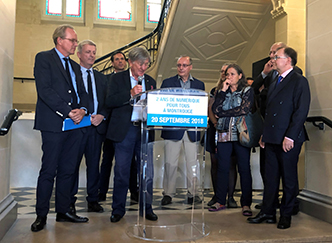