Along 2019 the major scopes of the ST Foundation were: 1) increase the efficacy and the professionalism of the DU Program to respond to an evolving international context; 2) strengthen the attention of the organization towards underprivileged population in all intervention countries.

The Digital Unify Program offered free computer access and training to 729’865 beneficiaries since its inception and as of December 2019.

Change in the Board and in the organizational structure
On March 28, 2019 the ST Foundation Board elected Patrice Chastagner as the new President. The Board members and the ST Foundation’s staff sincerely expressed their gratitude to Mr. Fox for his commitment to the Foundation and welcomed Mr. Chastagner in his new role. On September 24, 2019 two new Directors were appointed to help the Foundation cope with the growing activities and projects. Patrick Dureault and Pietro Palella were invited to join the organization.

In parallel with the changes in the Board of Directors, the Foundation finalized a revision of the organization where the following functions were clearly defined:

Central missions: mostly related to the update and development of the educational material, managed by ST volunteers and Board Members.

Organizational Chart of the ST Foundation as of December 31, 2019 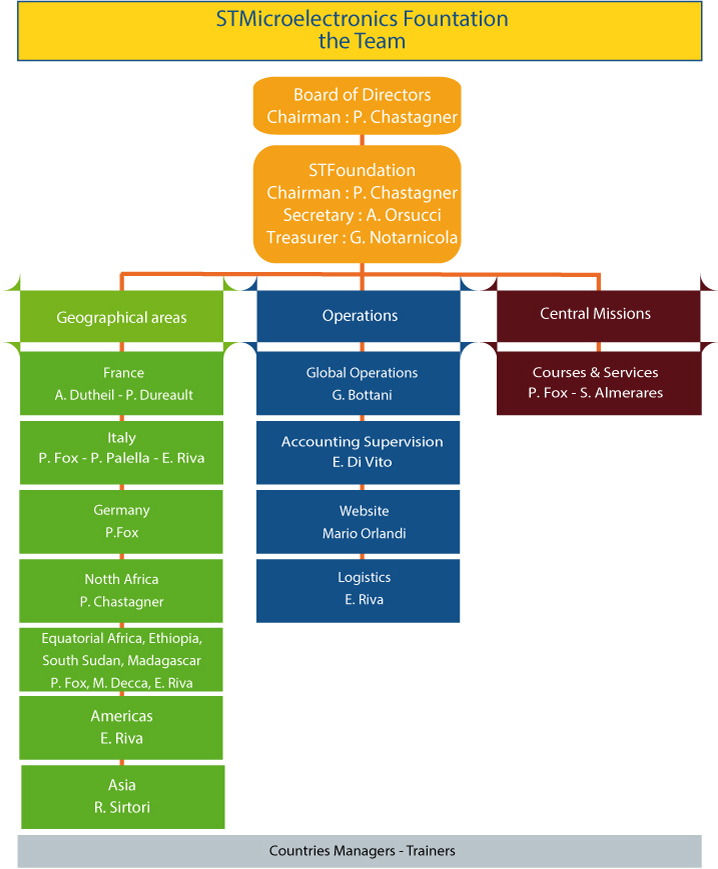 2019 represents a positive year for the ST Foundation. The slight decrease of the activities was globally planned and was due to two major reasons: 1) closure of the majority of the labs in Congo DR; 2) creation of ST Foundation India that brought with it a revision of the ongoing partnerships.  The implementation of the model lab concept in the areas of intervention helped the organization reaching two important objectives: 729’865 trainees were reached since the inception of the program, and 109,025 students took part in the ICB and Tablet for Kids classes only in 2019.

In 2019, the trainee breakdown by country is shown below:

Along the year two new educational offers were finalized with the scope of replying to new needs encountered in the implementation of the DU Program:

2019 was a fruitful year for many aspects and we can acknowledge the strong commitment of the Board of Directors to review the strategic priorities in terms of interventions areas, partnerships and new learning paths. More in details:

The ST Foundation and the ST Corporate External Communication team continued to collaborate also in 2019. Thanks to their precious help the 2018 Annual Report was prepared and distributed to ST Foundation key stakeholders, giving them specific insights on the key moments that characterized the activities along the year.  In close cooperation with the ST Volunteers (Italy) and the ST Site of Agrate Brianza the fourth edition of the Energy Run was organized in the Aldo Moro Park on September 22. It has showed a renewed and enriched “look” compared to previous years, allowing over 1,000 registered participants, including children and adults, to give their best to reach the finish line dirty and happy.  The Foundation welcomed the ST teams, composed of ST employees of Agrate site, which contributed to animate the run. Thanks to the good participation of public and sponsors the Foundation collected extra funds to support the ongoing activities in Italy and its intervention areas

2019 can be considered as a positive year in terms of partnership initiated and supported by external partners. Two major projects have to be highlighted:

In March 2018, the Section 8 Company, ST Foundation India, was officially registered and have become fully operational in 2019 being inspired by the following vision: “Bridging the Digital Divide. We will be a nation where at least one person per household will be empowered with basic digital literacy skills and to work as a leading NGO working on reducing Digital Divide throughout the world”.  Along 2019, directed by this guideline ST Foundation India finalized the transition of all the projects formerly carried out by the liaison office and was able to guarantee a good transition of all the activities and running programs. This very specific moment was also taken to review all the existing collaborations terminating those ones that were no longer in line with the expectations.

In February the procedure to establish Fondation ST pour le Maroc under the form of declared association has been completed. Accordingly, the new association started all the needed procedures to become fully operational under the guidance of the new board consisting of Pietro Fox, President, Patrice Chastagner, Treasurer, and Ilham El Gaf. Alessandro Orsucci appointed as secretary.

All the activities will be gradually managed by the new organization staring from January 2020.

With the support of the representatives of the ST Foundation India and of the ST volunteers of Muar, the T4K course was made available also in Malaysia and proposed totally free of charge to interested partners. The local ST volunteers first helped the Foundation to customize the training material to the local context and needs so that the course could be really efficient and tailored to kids’ culture. As a second step, on October 9 for 3 days, a train the trainer course was organized under the guidance of Kamal Deep Jain and Bhavesh Upadhay. It was attended by 21 participants that, from now on, will further cascade it to the kids. The operational phase will be kicked of early next year in the local schools.

For the third year in a row, ST Foundation begins the season of summer camps 2019 in Morocco.  In collaboration with its various partners, mainly the Ministry of Youth and Sports, the city of Casablanca and other associative partners, ST Foundation offers ICB courses as free of charge educational activity to children participating to summer camps. Once again, the program continued its development by increasing the number of labs from 11 in 2018 to 21 labs in 2019, in different regions of Morocco training over 7,600 children. In this context, the Foundation is pleased to welcome the OCP Group as a new partner.

The ST Foundation monitors its activities using a real-time reporting system that was designed by Davide Brambilla, ST volunteer who preciously supported us for over 4 years. Along 2019 the task was given to an external supplier since the activity has become too demanding.

Courses organized and students trained during 2019

With the same tool, the organization we can collect personal data of the beneficiaries attending the courses and therefore understand the coming trends and specific needs of the different publics. 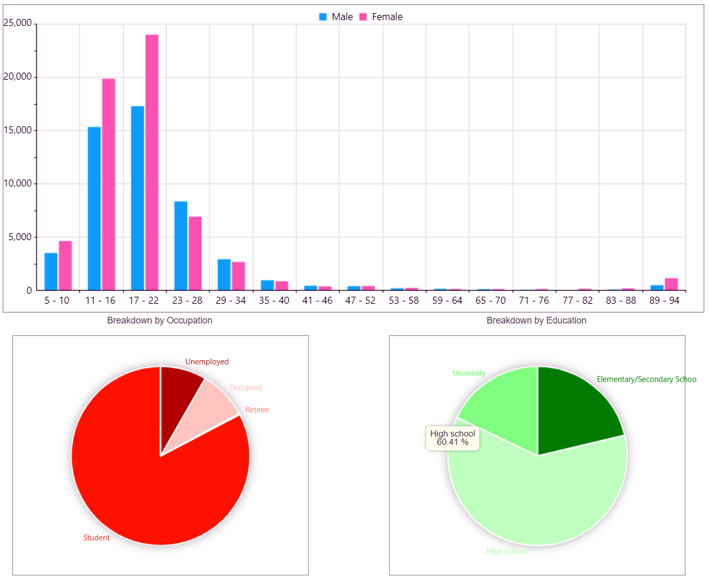 At the end of the ICB classes students are asked to take a test and reply to dedicated questionnaire designed to monitor the impact the course is having on their habits. The results are remarkable:

Students, who before joining the ST Foundation ICB courses were mainly illiterate from an informatics point of view, at the end of this educational path use independently computers mainly to: surf the Internet (75%), communicate with friends and use social media (70%), write documents (67%), doing easy calculations (66%) and read emails (64%). It is also interesting the fact that 53% of our respondents are using the ICB competences to look for a job.

Table 1 Replies to the question “Currently do you use computer for?” showing the World Wide overview on the impact of the ICB Course

Renato Sirtori and Giovanna Bottani organized a week mission to the Philippines and Malaysia to accomplish different objectives. In the visit, to both the ST plants of Calamba and Muar, Renato and Giovanna presented to the management the worldwide activities of the Foundation while giving an overview on the local communities that are currently supporting the DU Program in different countries. In parallel ad hoc meetings were organized with the volunteers to evaluate how to boost activities in the premises of both plants. In Calamba on February 18 a Town Meeting was organized to present a call to action for new volunteers. The day after Renato, Giovanna and ST volunteers were all invited to a ceremony at the Jose Rizal Primary School to celebrate the over 1,000 kids trained with the T4K program in less than 6 months and to meet the Department of the Education of Calamba to extend the T4K to other 6 schools with the added value of having the course embedded in the school curriculum. On February 21 in Muar the ST Foundation representatives together with ST volunteers took part to a small ceremony at Kampung Baru Lenga Primary School to donate 4 laptops.

Mauro Decca organized a 10-day mission to the Democratic Republic of Congo and Burundi to achieve the common goal to audit and optimizing the activities performed in the two countries. Following this principle, it was decided to activate a roadmap to close those centers where the Foundation has been active for many years and almost all the possible beneficiaries were reached.  It was also decided for the Democratic Republic of Congo to maintain active those centers located in the Uvira area that are managed through the support of our local partner in Burundi.

Patrice Chastagner visited Morocco for a week mission to meet key potential partners of the Foundation to boost the local activity in the near future while verifying the status of the new local Association which is now ready to operate.  The key achievements of his mission were:

On September 27, Cristian Bernareggi and Enrico Riva visited Sierra Leone for a one-week mission to launch the pilot run of the ICB for visually impaired in the Milton Margai School for the Blind located in Freetown. The key scope of the mission was to give a “train the trainer” course to the teachers of the school, with the precious support of Dr. Bernareggi, specialist for University of Milan in developing ad hoc training tools for blind, who adapted the ICB course to the needs of visually impaired people. The pilot run of the course was started with a first group of 10 students. Two trainers, among the most promising participants of the “train the trainer” course, were selected to continue the course independently. The pilot phase will end in Q1 2020 and it will give the possibility to officially add this educational option to the DU Program.

On December 2nd, Pietro Fox planned a week mission to Senegal to achieve several objectives. First of all, he organized a meeting with Concept, the local partner through which the Foundation works locally to evaluate the state of the collaboration. He visited several centers to audit the running activities and met the majors of the Grand Dakar area, that could contribute to the expansion of the Tablet for Kids course bearing part of the organizational costs. 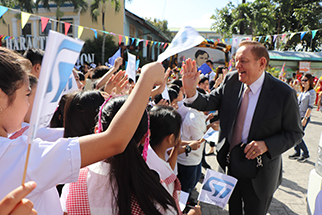 Picture 3. Pietro, Enrico and Cristian during
the pilot run of the ICBVI in Sierra Leone 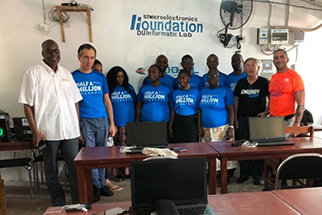 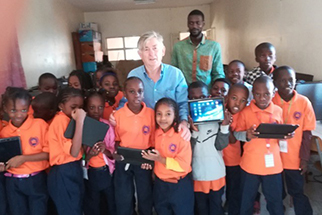