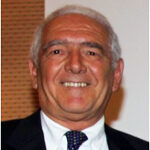 Mauro Decca was born in Brescia Italy in 1945. He graduated in Electronics at the Industrial Technical Institute of Brescia.

He is married, with two daughters and two grand-children.

He left STMicroelectronics in 2008 to pursue his private life after 44 years of service in the in the Company.

He began his career in Manufacturing, then he moved to Planning and Supply Chain, and finally in 1990 he was promoted to the Management of Product Divisions.

He has interest in skiing, climbing, diving, travelling and motor biking and he fluently speaks English and French.

In 2010 and 2011 he spent several months in Burundi at the Alessandro Rossi Technical High School in Ngozi to improve the Self-financing Project.

Since 2011 he is a board member of STMicroelectronics Foundation as volunteer, actively participating to install and develop Digital Unify centers in Burundi and Congo RD, creating also a local Management system to follow directly from the country the activity of the ST Foundation.