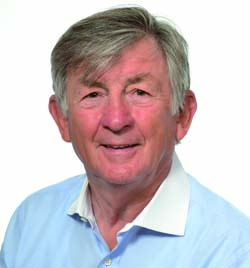 Pietro Fox was born in Vicenza, Italy in 1938. He graduated at the Industrial Technical Institute Alessandro Rossi in 1957 as did his own father (Leone Fox, who graduated in 1921) and uncle (Felice Fox, who graduated in 1930). He began his career in London in 1958 at Standard Telephone & Cables in the laboratory for semiconductor applications. He returned to Italy in 1962 and became marketing engineer at Raytheon-Elsi in Milan and Palermo. In 1964 he joined SGS-Fairchild (now STMicroelectronics) in the Product Marketing division. In September 1971, he became Director of Sales for North America and was appointed Chairman of the newly created SGS-ATES Semiconductor Corporation.In March 1976 he moved to Germany as General Manager of SGS Microelectronics GmbH; in June 1987 was appointed General Manager of SGS-THOMSON Microelectronics GmbH. In 1994 he took charge of the European telecommunications sector with the title of VP Telecom Business Unit Europe. In 1998 he was appointed Corporate V.P. Europe Region (based in Geneva) with responsibility for sales of over two billion euros. He left STMicroelectronics in 2000 to pursue his private life. In 1989, The Chamber of Commerce and Agriculture in Vicenza awarded him the gold medal for professional merits. In 2003 he was appointed Executive Vice President of the newly founded WITAR, an NGO created in 2002 on the initiative of Federico Faggin, then president of the Alumni Association of the Industrial Technical Institute Alessandro Rossi in Vicenza, to promote and support the technical education in developing countries in order to encourage social and economic development.The Technical High School in Ngozi, a small town north of Burundi, is chosen as its first project. Here Pietro coordinated the construction of 2000 square meters for classrooms, laboratories and workshops, the installation of the necessary equipment for the specializations of Mechanics, Electrotechnics, Electronics and Computer Education and the training of local teachers on the use of the said equipment. Since 2003 he traveled 13 times to Burundi in order to monitor these activities. In December 2009 he was appointed President of the Association.