The partnership with the Don Bosco Foundation in Cambodia wished to help bridge the digital divide in the country, by fulfilling DU objectives of reaching people who have no access to and no knowledge of computers and internet and offering them both, technology and training.

The Don Bosco Technical School was first opened in Phnom Penh in 1991 as the first project of the Salesian Congregation of Don Bosco in Cambodia in the fields of technical education, children sponsorship, schools rebuilding and youth centers. Between 1991 and 2010, it has supported more than 50 thousand Cambodian children and youth in different programs and with the association of other organizations, for their basic education. It offers degrees in technical areas like electricity, electronic, automotive, printing, webmasters, audiovisual edition and production, journalism, social communication, secretarial, sawing, cooking, hotel management and welding.

DU trainers  were trained  in Phnom Penh at Don Bosco Foundation’s premises in 2008 through the voluntary effort and dedication of Indian senior ICBF (Informatics and Computer Basics Facilitation) trainers.

The program  trained pupils and different constituencies of the surrounding community in the past years and has reached over 734 trainees as of  Q3 2013.

The program is now officially closed as we reached all the potential trainees of the area. 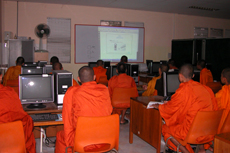