Germany is the second most popular migration destination in the world, after the United States. Moreover, according to Eurostat’s data Germany alone granted 60% of all positive asylum decisions from in the European Union (EU) in 2017. In 2015 it welcomed over 1.2 million migrants and beginning of 2016 they were distributed across the nation with the scope of sharing the cost and enhancing the integration process. As a fundamental element of this process we find a particular attention for education and among others the need to make the immigrants part of the e-society European countries live in.

With this background in mind the Foundation wanted to become active in the country to give its contribution to help migrants in building a better future with a training path that would help them in being more integrated in society. 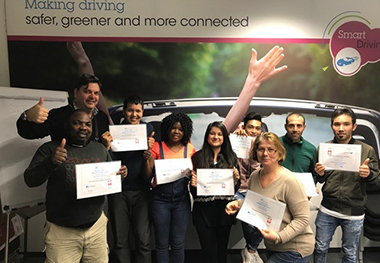 Thanks to the support of the ST plant of Munich in 2015 the ST Foundation has begun presenting its activities in the country with the help of ST volunteers. The activities are continuing regularly since the inception concentrating the attention, in line with the need of the country, on a specific audience: migrants and refugees.

As of December 2019, capitalizing on the help provided by local ST volunteers, the program has reached over 150 beneficiaries.