In Italy we can consider that the digital divide issue is still a reality faced by over 7 million people that are not connected in any way to the internet.

Among the 28 States that belong to the European Union the country ranks 25th according to the Digital Economy and Society Index (DESI). According to the different researches carried out by DESI the key challenge Italy is facing is the low level of digital skills that brings directly the country among low performers. Starting from this scenario the DU Program was launched in Italy in 2003, the ST volunteers were among the very first supporters of the ST Foundation’s mission. The courses targeted the communities living in the neighborhoods of the ST plant of Agrate, in the Milan area, to help them to familiarize with computers.

Then throughout the years the program has evolved, always reaching new beneficiaries and needy sectors of society. As of today, the Foundation, having the chance to work with different groups of people, has become extremely specialized for specific typologies of beneficiaries such as: migrants, old people and prisoners.

The activities have reached 12 cities and are carried out in 18 labs mainly concentrated in the north of the country, with ad hoc interventions in the South and more in detail in the area of Catania and Naples. 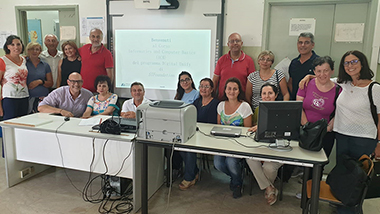 All the projects are mainly carried out with the support of ST employees (75 based in Agrate and 36 in Catania) It’s thanks to them if the Foundation, has not only has reached so many areas, but also started organizing new activities to boost its popularity while raising extra funds.

A particular good example is the Energy Run, a mud race that took place this year for the fourth time reaching extremely positive results.

DU Italy has trained over 5,200 trainees since its inception.