Since 2005, Thailand has experienced a general improvement in its socioeconomic development, as indicated by the UNDP’s Human Development Index (HDI). In 2014 the country received an HDI ranking of 93 out of 187 countries while the country’s 2015 per-capita GDP (purchasing power parity) was 16,306 USD alongside a moderately growing economy.

Despite what can be regarded as a firm improvement of the general living conditions of the population a relevant number of Thais still suffers from poverty, social exclusion or discrimination due to different factors like ethnicity, gender, and geographic location. These persistent inequalities are so rooted in the country that have contributed to marginalize specific sections of society from accessing adequate levels of education, health care and all those services that could help the population improve its standards of living.  Even worse, a continuous privatization of the health care and education system is privileging those people who belong to the upper classes contributing to widening the already existing disparities.

The DU Program was initiated in the country in 2016. The purpose was clearly to help create those infrastructures that are needed to offer good quality education to marginalized people with a particular attention to beneficiaries coming from the rural areas of the country where there is almost no opportunity to have access to computer centers.

The project grew steadily till the end of 2018 at VBAC college in Chiang Rai and the Foundation trained over 500 students. During 2019 the activities were put on hold due to a reorganization of the ongoing collaboration and we hope to restart as soon as possible the courses in the country. 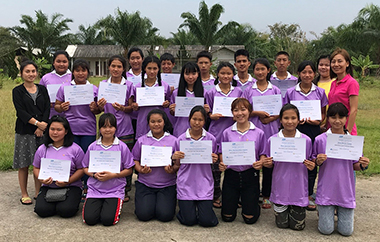