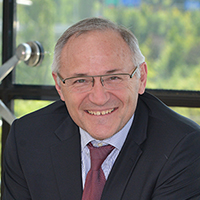 Philippe Brun is President of STMicroelectronics’ Human Resources and Corporate Social Responsibility. Responsible for HR at ST since August 2012, his mission has been expanded to cover the Company’s social responsibility, environment, health and safety, internal communication, and Corporate security. He is a member of ST’s Executive Committee.

Brun started his career at the Pechiney Group. In 1986, he joined Thomson Semiconducteurs, a predecessor to STMicroelectronics, as a back-end process engineer. From 1989 to 1996, Brun managed Human Resources at the Grenoble, France site and served as Site Director at the Company’s St. Genis facility (France). In 1996, he was promoted to Human Resources Director responsible for over 10,000 employees in ST’s manufacturing organization worldwide.  From 1999 to 2010, Brun served as Fab Operations and Site Director at ST’s plant in Rousset, France. In January 2011, he was appointed Group VP for execution excellence in ST’s Front-End Manufacturing organization.

Philippe Brun was born in Lyon, France, in 1958. He earned an engineering degree from France’s Ecole Nationale Supérieure d’Arts et Métiers (ENSAM). He also holds a Masters degree in Aerospace Engineering from the University of Colorado and a management degree from the IFG School of Business (France).