The key focus for the ST Foundation in 2011 was to maximize the impact and efficiency of its most important program, the Digital Unify, which has the goal to help bridge the digital divide: the gap between those who have access, and those who do not, to modern digital technologies. The Digital Unify offered free computer access and training to over 148’000 beneficiaries since its inception and as of 2011. STMicroelectronics Foundation received a donation of 750’00 USD from STMicroelectronics in 2011.

STMicroelectronics Foundation’s first president and co-founder Carlo Emanuele Ottaviani passed away early 2011. Carlo will be missed dearly and his legacy and contribution to ST Foundation will always be remembered.

In March 2011, Pietro Fox was appointed as the new president. Pietro, a retired ST Executive Officer and a philanthropist, soon initiated a new strategy in order to build on the past legacy and bring the Foundation to even greater heights. Four new Board Members have joined hand with him in 2011: Mauro Decca and Alain Dutheil, both former ST Executive Officers, and Tjerk Hooghiemstra and Otto Kosgalwies, respectively Senior Executive Vice President, Chief Administrative Officer and Executive Vice President, Company Infrastructures and Services have joined ST Foundation’s Board last Wednesday. 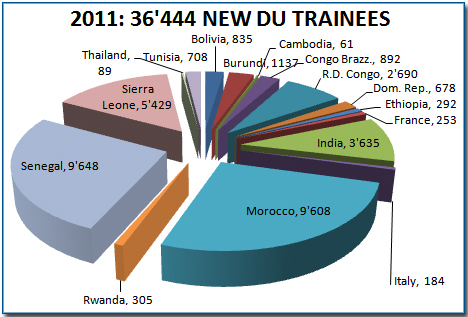 Beginning of July 2011, ST Foundation’s Board of Directors has agreed on a new roadmap for Digital Unify, based on two axes. On the one side, the development of a Local Community program based on a network of ST volunteers in each major ST site to be launched in partnership with HR and CSR teams. On the other side, the development of Digital Unify in Sub-Saharan Africa, starting with Burundi, South Kivu (D.R. Congo), Senegal and Sierra Leone.

On October, 25 Tjerk Hooghiemstra, ST Foundation’s Board Member and ST Chief Administrative Officer, informed all ST site managers to give priority to ST Foundation when it comes to old machines that are removed from the ST fleet. It has been agreed that site ICT Manager will take care of handing over available hardware to the Sit, after taking care of security procedures as per ST rules. Assembling spare parts and refurbishing will be taken care of either by the sites or by ST Foundation’s volunteers. This hardware recuperation is meant to equip internal labs as part of the soon to be launched Local Communities initiative and external Digital Unify labs when possible.

The Model Lab approach represents a new strategy for ST Foundation to equip more labs at a lower cost and in a more efficient way. It consists of setting up a Pilot Model Lab with standard hardware features and defined characteristics (including choice of PCs and operating systems, design of lab, detailed description of internet connection through satellite antenna and choice of electrical supply, including the option of solar panels when no electricity is available) which make it suitable to be used worldwide in DU labs. This will allow savings on the purchase of hardware and furniture, ensure a smart choice of equipments and reduce installation time and costs. The complete Model Lab project is expected to be ready early 2012 and will allow a quick deployment of the first pilot experience in rural Burundi at the Bugwana Xaverians Mission. The lab will be named after the late Carlo E. Ottaviani.

The Informatics and Basics Course V3.0 in Windows XP and Microsoft Office modularity has been finalized by the Update Group. This latter is composed of motivated ST volunteers from Italy and India who have been working on a throughout revision since 2010 on top of their everyday’s job. This major update has included updating obsolete information, enclosing suggestions received from trainers worldwide, replacing and adding pictures, simplifying the overall content, ensure consistency across the course and comprehensive English revision. The group will now focus on translations and on different modularities (and notably Linux and Open Office).

In December 2011, a small informal celebration took place, at the presence of Pietro Fox, ST Foundation’s president, and Pasquale Pistorio, ST Foundation’s honorary chairman, as well as of Board members Mario Arlati and Mauro Decca and ST Agrate volunteers in order to celebrate the 10th anniversary of the Foundation. Pictures were shown from DU projects around the world and words were spent in memory of ST Foundation’s first president, the late Carlo Emanuele Ottaviani. All took the time to appreciate the work which has been done and shared whishes for an even larger success for our mission to bridge the digital divide in the future.